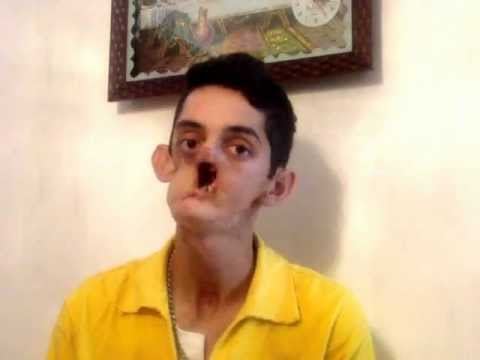 Oziel was born in Terra Nova do Norte – MT, and lives in Lucas do Rio verde-MT. His father’s name is João Damazio.

Aged 22, Oziel is the youngest of 6 children, and lives with his mother Namir Sallet.
At the age of 10 he went to the dentist to check for foreign tissue next to a tooth. There was a great deal of difficulty and delay in the months that followed, and professionals following the precise diagnosis – which even led to the
removal of several teeth – until Oziel was found to have a rare type of cancer in his mouth.
It required several surgical interventions for removal, which caused a great damage to his face. The attempt to reimplant the tissues was unsuccessful, and only part of his face was recovered. Today he needs help, as he has been struggling for over 10 years to perform even the simplest activities such as breathing and eating properly. Oziel wants to have a normal life just like normal people.